This is one of my favourite interviews we’ve done so far. To be honest I didn’t know a whole lot about Davey Blair, other than seeing a few photos in the various mags (notably a pretty cool cover in the last issue of Kiteworld mag) and knowing he was part of that cool group of Hawaii kiters who seem to get on every amazing filming trip with Elliot Loboe or John Bilderback! Anyway, he was over for the Kiteworld Slider Jam and Jim (editor-in-chief) was kind enough to shepherd Davey around to our offices so we could get a different view point from our previous interviews, which admittedly focus more on the freestyle riding (of course Steph Bridge’s course racing board interview is an exception). Davey is a North Shore, Oahu, resident and so riding waves is a huge passion for him and I was excited to see what motivates and inspires him to get out there and battle the towering mountains that attack the Hawaiian islands. He’s also into his powered riding, particularly hitting kickers and sliders so he had a few words to day say about that side of things too.

My only regret with this interview was not finding a way to include my favourite response to my common question “What would you do if a friend is getting bored and de-motivated kitesurfing?” Normally this gains replies which are practical – try a new trick; kite at a different beach; take a trip with some friends. Not for Davey, his response – “Tell him he’s a little girl and then slowly increase the trash talk until he or she is riled up and they want to prove to me that they can do more on the water” – this was a serious response, said with determination, Davey loves kiting and will do what he was to to make sure everyone around him is loving it too!

Check out the interview… And we’ve got more videos coming over the next week – A 3 part James Boulding interview – we just couldn’t shut him up! Plenty more trick definition videos to get you inspire to try something new, including some Aaron Hadlow clips from the Progression vault that are as innovative now, as when I filmed them nearly 3 years ago!

The best way to graduate from beginner is... 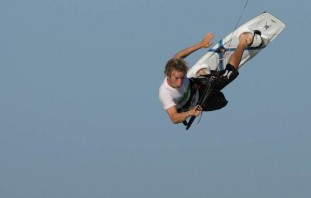