On a recent trip to South Africa Progression embarked on a new project that we have been trying to get off the ground for a while.  The project takes a lot of what Progression have become known for – practical content, in depth analysis, and a focus on equiping kiters with all the knowledge they need to be better riders.

The idea is to provide a independent and ubiquitous video guide to as many kites on the market as possible, allowing users to easily compare  and move between brands as well as understanding how to use any kite to its optimum performance.

So for the last couple of months we’ve had a Flexifoil 9m Hadlow as a pilot for this. We had some time with the Flexi team and Mr Hadlow himself to pick their brains on all the technical setup side of things. We’ve now flown the kite a fair few times, putting  it through its paces so here’s a few points that might be of interest:

I think the main thing I took away from flying the kite, especially on the water, is that if you have come from flying 4 line bridle/hybrid/bow or older c style kites, then the Hadlow (much like a Fuel I imagine) will feel quite strange! But even after my first hour I was starting to adapt my riding to take advantage of what this style of kite has to offer & really loving it. So my main bit of advice would be that if you demo the kite don’t just take it out for an hour and then make a decision, you need to devote some time to changing your riding style to get the most from the kite. This goes for any kite really but for something which is aimed at the more high performance end of the market, like the Hadlow, you need to be prepared to give it a little more of your attention. But, it will pay off!

Anyway, we’re back in the UK and starting the edit of the first set of Kite Guide videos so expect to see all this & more explained in video form real soon…

A forum post on Kite Crowd actually made us decide to write this blog post a little earlier than planned, check it out for a discussion on the new Hadlow 2011 kite.

Get Progression Mobile on iTunes 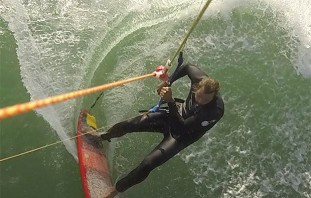 Tech video gadgets to help you improve your kiting