I was lucky enough to fly out to Egypt for a week, with James Boulding, to film for the next Progression DVD, Kiteboarding Intermediate Volume 1. We had already filmed a large part of this DVD, last year when we went to Egypt with Christian and Karine to film the updated Kiteboarding Beginner DVD, but we were missing a load of shots and the British summer didn’t really give us the clear blue skies we need.

So we headed to Soma Bay as James has spent a number of seasons there teaching and coaching and knew the area like the back of his hand. The spot is perfect with a variety of lagoons and sandbars providing butter flat water at low tide and waist deep water as far as the eye can see, ideal for all levels of freestyle riders. The wind starts to builds at around 9am, cross off. Then fills in at around 10-11am and swings round to cross shore and cleans up. If the wind is strong it will blow all day otherwise skip lunch as the wind will drop at around 2.30.

We had early starts planned for most of the week to catch the wind, although I initially had a couple of rough nights sleep adapting to James sleep shouting & random bursts of noise (not necessarily words!)

We filmed and kited at the Mark Warner centre where there were more intermediate riders and generally much quieter. A few riders had a respectable arsenal of intermediate tricks on both tacks, but it still amazed me how many still kited with bad stance due to their equipment not being tuned properly. Most riders didn’t really understand how to adjust their kites to make their stance more bearable in stronger winds. Typically one arm is fully stretched to control the bar and the other out straight behind to help counter balance their weight and stop them being pulled forwards. I think the only rider with a sensible stance was James and one other instructor! On the flipside in lighter winds you would see a lot of large kites stalling and riders sinking, where as you could actually (with good technique) happily stay upwind with a kite a couple of metres smaller. I would recommend to anyone who has brought a new kite whether they are a Beginner, Intermediate or Advanced to take time one session and test out the different settings on the bar and the kite’s pigtails to see how they effect the power and the speed that your kite can turn.

Funnily enough these three areas – lightwind riding, highwind riding and kit tuning, were what we were out in Egypt to film. The new Intermediate DVD is all about taking the next steps on from being a competent beginner. Starting off with your first tricks – toeside riding, carving turns & jumping but just as important is to increase your confidence and understand of your locations, conditions and equipment, allowing you to kite in a wider range of wind strengths and locations, and importantly getting your stance sorted so you learn new tricks far easier. We’ll have information on this new DVD over the coming weeks as we get closer to its release in November. 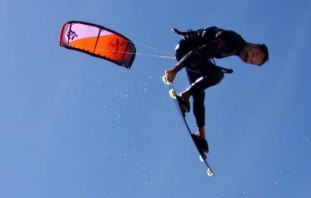